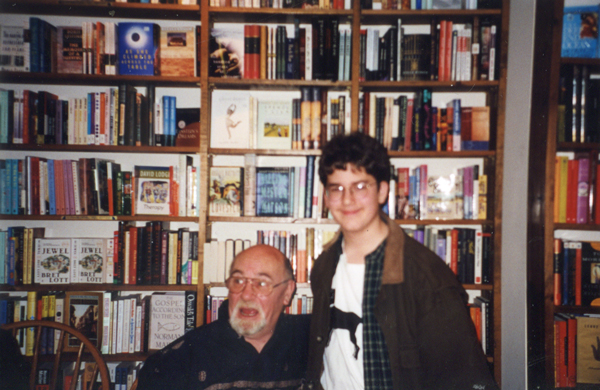 Monday morning, I received word that my dear friend Brian Jacques, author of the Redwall series, had passed away. After a day spent writing to mutual friends, I decided to expand one of the letters into this post. Brian's death was sudden and unexpected. The last time we spoke, the future seemed boundless. “I hope we can work together on many other books. Take care of yourself!” Part of mourning Brian is mourning the books I know he would have written. I’ll miss the regularity of the novels, year after year. When I was young, I would get them as Christmas presents. Eventually, I would see the manuscript only days after our editor did, neatly stacked into a huge package that was more cement bag than envelope. The pages were typed on an old typewriter to the very end.
Brian leaves a legacy not only of books, but of lives and communities made better by his imagination and his generosity. In reconnecting with the fan community, I've been counting the marriages, relationships, careers, educations, and other blessings that came through Redwall. Spouses that met through internet message boards, friends that met at book signings, people deciding to become software engineers, or authors, or journalists, or English professors, and tracing these decisions to the first time they picked up a Redwall book.
I wouldn't have become an illustrator if not for Brian's belief that I already was one. Drawing characters from books was something I did, and loved, since childhood, but to make a life out of it still seems like a miracle. Brian would eventually write my college recommendations, and my admissions essays focused on his influence and my work on the Redwall series. At Princeton, I studied medieval architecture and poetry.
The last time I saw Brian in person was late 2007. Penguin threw a wonderful party for Redwall’s 20th Anniversary, and Redwallers from both sides of the ocean reunited or met in person for the first time. Eventually, I gravitated towards a group I saw was like me. I may have been the only illustrator, but I was not the only person who owed Brian their place in the world. A fellow Princeton alumnus, an attorney, also had his college recommendation letter written by Brian. “You’re like the Godfather,” he said.  "But in a good way." Brian stopped what he was doing and slipped into an excellent Marlon Brando impression.
Brian was much better than the Godfather, though. When Brian gave, he never asked for anything in return.  It’s difficult to describe this without seeming gauche, bragging. Sometimes, Brian met a child, and he decided to do what he could to see that child’s dreams come true. I do not know why I was included in this number. I never asked. I don’t know that any of us did. Brian didn’t just write books, he wrote lives. He was, and is, an extraordinary example of what an artist can make possible. When you knew Brian, you believed that anything was possible.
My mother, who met Brian several times, had a way of putting this as only a parent can: "Rest in peace dear friend of children, and thank you for making a child's dream a wonderful reality."
Posted by Sean Rubin at 6:14 PM