Redwall: On Racism and Animal Stories 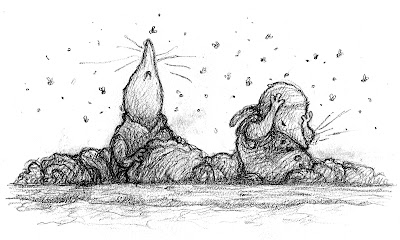 Eventually, I would love very much to write a real essay entitled "On Animals Stories," that serves as a sort of apology for this non-genre similar to the way JRR Tolkien's "On Fairy-Stories" addresses fairy tales. But the professor himself spoke to animal stories in his essay, calling them beast-fables:

"The beast-fable has, of course, a connexion with fairy-stories. Beasts and birds and other creatures often talk like men in real fairy-stories …in stories in which no human being is concerned; or in which the animals are the heroes and heroines, and men and women, if they appear, are mere adjuncts; and above all those in which the animal form is only a mask upon a human face, a device of the satirist or the preacher, in these we have beast-fable and not fairy-story: whether it be Reynard the Fox, or The Nun's Priest's Tale, or Brer Rabbit, or merely The Three Little Pigs. The stories of Beatrix Potter lie near the borders of Faerie, but outside it, I think, for the most part. Their nearness is due largely to their strong moral element: by which I mean their inherent morality, not any allegorical signification. But Peter Rabbit, though it contains a prohibition, and though there are prohibitions in fairyland (as, probably, there are throughout the universe on every plane and in every dimension), remains a beast-fable."

I see and hear a lot of discussion of Brian Jacques' use of animal species in the Redwall stories, and how the "inherent" evil of stoats, rats, ferrets, and other "vermin" amounts to a kind of racism implicit in Brian's writing. Unfortunately, this reading ignores the nature and tradition of the animal stories from which Redwall descends. Foxes in Redwall aren't devious because they're foxes, they're foxes because they're devious. A dirty rat is a dirty rat because he's a dirty rat. And while Brian was neither a satirist nor a preacher, there is a strong moral element to Redwall, where wits and compassion always trump naked force and selfishness. Brian insisted this was the reason mice were his first heroes. Children, who are small and often controlled by others, can relate to mice. Matthias's victory over Cluny is about a kid having more heart and brains than a bully. As Troy Howell put it, the whole series is about the triumph of the oppressed over the opressor.

Brian used to joke that Tolkien plundered Norse mythology to come up with the Lord of the Rings. Anyone can see this, and Tolkien even lamented his more obvious lifts, including all thirteen dwarf-names in the Hobbit. Instead, Brian played with materials already in everyone's consciousness, ingredients from what another writer called the "back-kitchen" of the mind. In the end, I think this is an important aspect what has given Redwall its staying power.  We've seen these characters in Aesop, Puss in Boots, and Reynard the Fox, and we've heard their stories during Arabian Nights and from Uncle Remus. George Orwell and Art Spiegelman contributed to this tradition, as did the writer responsible for the back-kitchen quote-- a Scot named Kenneth Graham.

The Redwall stories aren't about race, but they're not entirely about animals, either.  They're about villains sly as foxes, soldiers gregarious and noble as hares, and heroes quick and clever as mice. In other words, Redwall is about people, and children most of all.
Posted by Sean Rubin at 4:17 PM